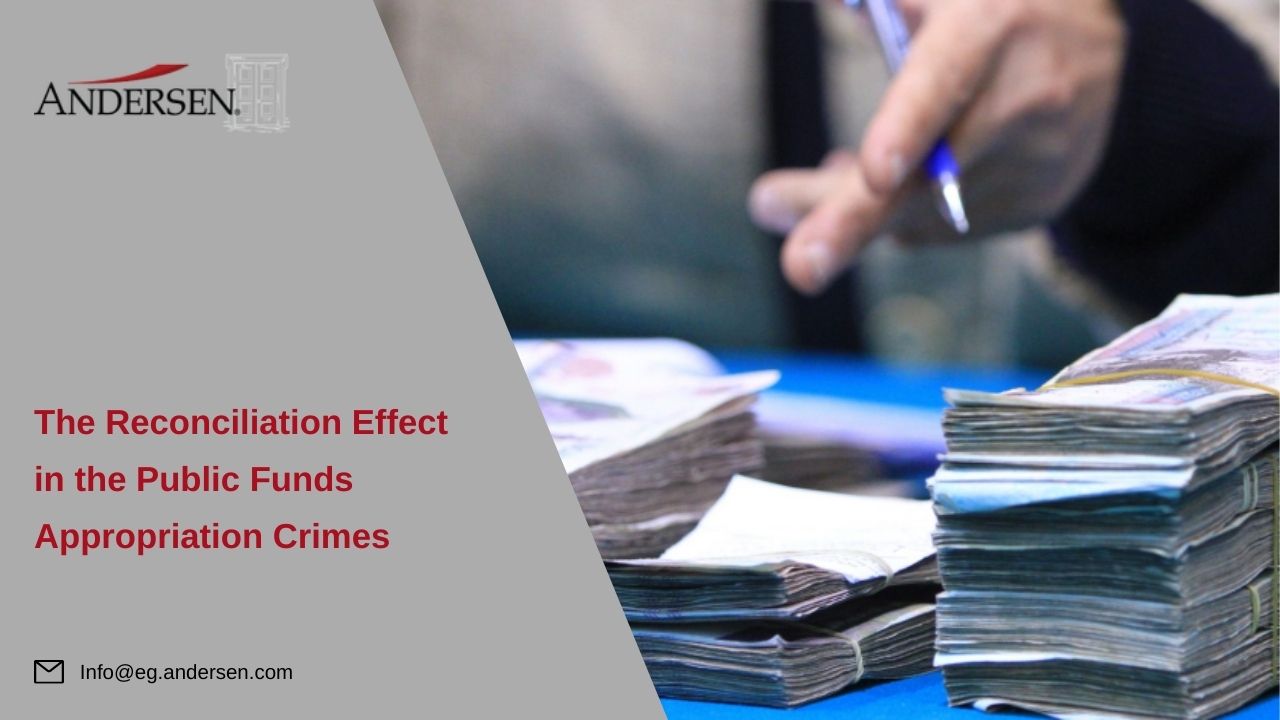 The Reconciliation Effect in the Public Funds Appropriation Crimes

Public Funds Appropriation Crimes takes place once such funds has been taken by stealth, force, or deception with the intent of wasting the state’s funds. This crime, like any other crimes, must have the elements of will and knowledge of the Accuser. The sanctions varies according to the Accuser’s intention; thus, if the act of appropriation occurs with the possession intention, then the crime shall be considered a felony, on the other hand, if the crime is linked to a forgery crime or the usage of a forged document, then the sanction shall be life or rigorous imprisonment, however, if the act of appropriation occurs without the intention of ownership, thus, the crime shall be considered as a misdemeanor and the sanction shall be imprisonment in addition to a fine.

Previously, the mainstream was the lack of reconciliation in the aforementioned crimes, on the ground of the state’s right to inflict appropriate sanctions on the Accuser as a recompense for what he has committed after a fair public trial. However, such mainstream resulted in some legal, objective and procedural issues in addition to the difficulty of recovering the appropriated funds; which led to  the deviation of the legislator from the original principal and placing restrictions on the criminal judge’s authorities with regards to the reconciliation cases of the public funds appropriation crimes; where the judge must rule with the case dismissal.

Pursuant to that; Decree No. 16 of 2015 was issued amending some provisions of the Criminal Procedural law and stated within its articles that it is permissible to reconcile in public funds appropriation crimes, and mentioned the reconciliation procedures where the reconciliation shall result in dismissing the criminal case with all its descriptions. The effect of such reconciliation shall extend to all accusers or convicted persons, depending on whether the case is under investigation or trial or after the issuance of the judgment.

Accordingly, in the event that the reconciliation was issued after the issuance of the judgment and before it becomes final, the execution of the sentences imposed on the offenders shall be suspended, however, if it is issued after the final judgment and the sentence has been already implemented/executed, the convicted person or attorney may submit a request to the Attorney-General supported by supporting documents in order to suspend the execution of the judgment.

Herein, we refer to one of the cases initiated by our office, where the Public Prosecution had accused (S.A) with the public funds appropriation crime that was linked to participating in a forgery crime of a document for one of the joint-stock companies, later on, the accused reconciled and returned the seized funds.

Maher Milad Iskander, the accuser’s lawyer, appealed the verdict, on the ground that Article(18 bis-b) of the Criminal Procedural law allowed the accuser in the public funds appropriation crimes to reconcile, and such reconciliation entails the dismissal of the criminal case and all its related descriptions.

Accordingly, the accusation of the appellant of participating in the forgery of the company’s document is pointless, since the dismissal of public funds appropriation crime by reconciliation, which is the basis of the dispute, shall be applied to the concerned forgery crime, in this regard, the appealed judgment has to be set aside and re-issue the revocation of the appropriation criminal case altogether with the participation in the forgery of the company’s documents.

Subsequently, the Court of Cassation decided to accept the appeal, set aside the appealed ruling, and dismiss the criminal case by reconciliation.