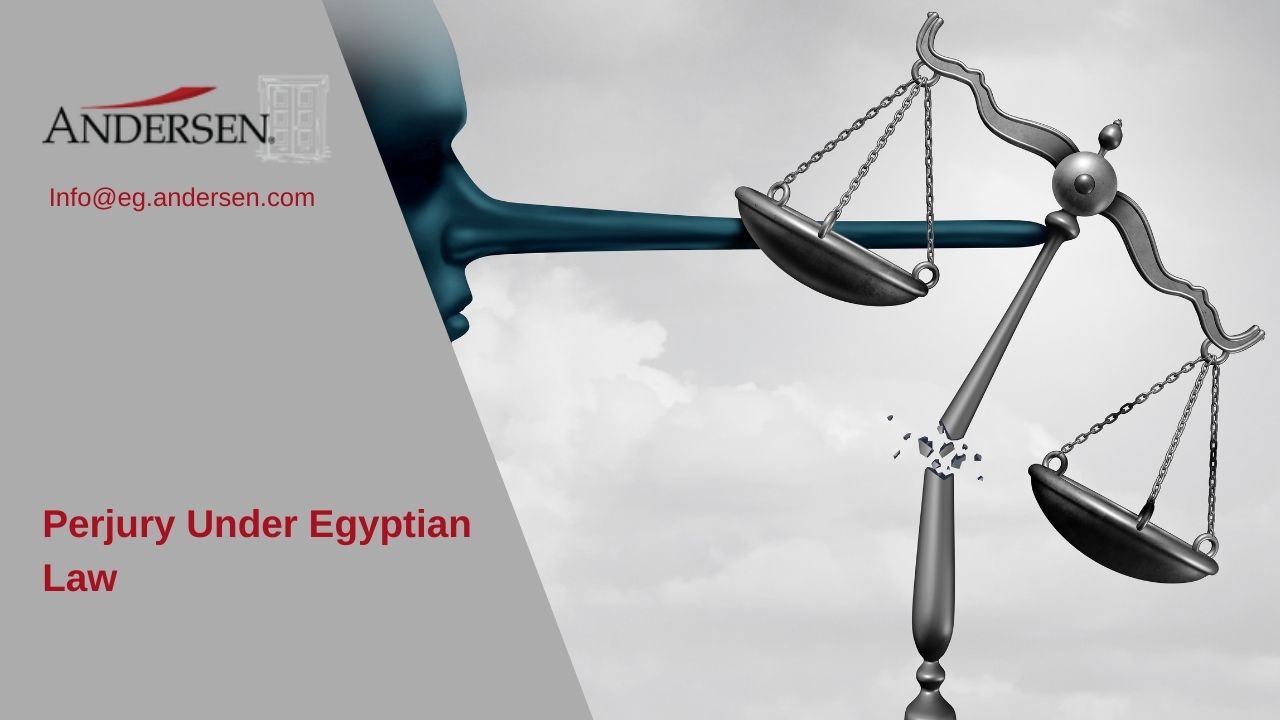 Perjury is the intentional falsification of an assertion, to tell the truth, whether written or spoken, on a matter which is essential to a judicial procedure, with the aim of misleading the judicial authority and deviating from the cases true focus, in order to achieve a favorable result for the accused or another third party.

Based on this, testimony is an essential aspect of procedural examination, as it is involved in all stages of the proceedings and is therefore often the basis of the final ruling.

By nature, witness statements play an essential role as evidence used by a judge during criminal litigation, since they involve material and moral facts that are difficult to prove in writing. It is on this basis that providing false information to the court, is an offense punishable by the Egyptian Penal Code since it could be used to usurp the authority of the courts, which in the long term, may cause the failure of the entire justice system.

A witness statement may be a reason to imprison or acquit an accused; accordingly, in order to rely on witness testimony as a valuable argument for evidence, it is necessary for the statement to include information personally known by the witness, and not general information known by the public which may be inaccurate or incomplete and therefore is unreliable.

Under the aforementioned Penal Code, perjury is a misdemeanor punishable by imprisonment from 24 hours up to 3 years, however, whoever testifies falsely against an accused, whose testimony results in the conviction of the accused or his innocence, shall be punished by rigorous imprisonment, and If perjury results in the execution for a felony, the witness can be sentenced to the death penalty.

The Egyptian legislator has imposed a special provision in the Penal Code, penalizing anyone who provides false statements before the competent court during a trial concerning death and inheritance, regardless of whether the witness knew that the statement was false or not, if it is shown that an inheritance claim is made on the basis of these statements, the penalty shall be imprisonment for a period not exceeding two years, or a fine not exceeding 500 Egyptian pounds.

Herein, we refer to one of the cases that our office held, wherein (C. M) had immigrated to Denmark and had two male heirs (T, B). After his death, the heirs came to Cairo for the father’s funeral and later returned to their businesses in Denmark.

After a while, they returned to Cairo to process their inheritance and discovered that the uncle and aunts had seized the inheritance by claiming that they were the only heirs, despite the fact that the sons of the deceased are males which prevents other members of the family from inheriting (under Islamic Sharia Law).

They also discovered that the uncle and aunts had brought two witnesses who had falsely confessed to the court with incorrect statements.

Accordingly, Maher Milad Iskandar, the lawyer for the true heirs, nullified the inheritance claim and reported the incident to the Public Prosecution. The court then ruled that the uncle, aunts and false witnesses must all be imprisoned for two years and implementation.

To conclude, the aim of this article is to highlight that perjury, can in certain circumstances be punishable even if the witness is unaware of the false information being stated, namely if an inheritance claim is made on the basis of these perjured facts. Otherwise, the general rule Is that the individual testifying must be personally aware of the falsities within his statements to be charged with perjury.